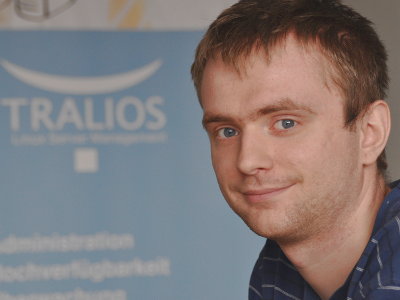 It’s been a while since I’ve posted on blog new stuff that I’ve been doing in Tralios. Since last time I did many new things so lets start it. For the beginning I got my hands on new Raspberry Pi and made it to work as monitoring display (mount share, open browser, set up ftp on boot etc.) and can say it’s funny thing to do. Later I went with Dominik to datacenters to install new servers we’ve got and damn, the security there is on high level and that noise in hall from all servers was very unpleasant. Next thing I had to do was more theoretical but very important to know. It was to know what services are running on machines and what do they do. I got to know how mail servers works, why in resolv.conf there was only localhost ip, why it’s good to use pdns etc. I learnt a lot by that.

In December we got 4 servers for testing purposes and next thing I was doing is to test if there’s any diffrence between hardware RAID and software RAID. Turned out that there’s little diffrence so we used software RAID for next tests. We also tested program called Pfsense (in short it’s Firewall/Nat software) and Dominik wanted me to make redundancy network consisted of 2 pfsense boxes, 2 servers and 2 switches (of course for testing). In meanwhile Simon showed me in short how to make Python scripts and I tried later to do simple script to check weather in city you can type as parameter. It was kinda easy to do except part with printing that the way Dominik wanted to so he helped me with it.

And that’s it. I hope I can put that knowledge in use in future because I’m starting to like it more and more 🙂